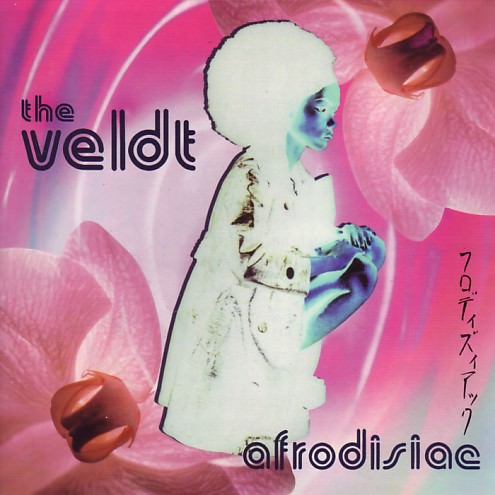 THE SCENE: The English music sub-genre “shoegazer pop” never took off large in America. Its layers of watery, echoey guitars nearly smothered most vocalists’ delivery and we here just couldn’t hang with that, man. But the Chapel Hill, N.C. natives The Veldt evolved this sound with the addition of hip-hop beats, resulting in their major-label debut, 1994’s breathtaking Afrodisiac.

Heavy blankets of oceanic guitars still ring through cuts like “Soul in a Jar” and “It’s Over” but the drums are surprisingly groovy and propulsive. Lead singer Daniel Chavis’ tenor cuts through the brittle fog like a mountain climber, his introspection soulfully directs the hard-driving bell tones of “You Take the World”.

“Until You’re Forever” dreamily glides like metallic butter melting over a very large piece of toast, rooted by unfeasibly funky, cannon-like drums, The sculptural feedback of “Heather” carves space with its leonine roar, and the band almost flirts with new jack swing in the shiny’n’ fuzzy “Wanna Be Where You Are”.

THE FALLOUT: “Black guys with guitars who aren’t bluesmen” were a difficult issue for their label, and in spite of positive reviews Afrodisiac never caught a wave of acceptance. Their next album was released independently, and after its followup The Veldt packed it in.

Afrodisiac is out of print worldwide but you can pick up used copies from Amazon and you can sample tracks here:

If you stood on the planet equidistant from the musical centers of New York and London then lunged into the Atlantic Ocean, that feeling would be the sound of this album. Unique, unmatched and overlooked, Afrodisiac is still waiting to catch a wave.

NEXT WEEK: The octagonal doctor is in.