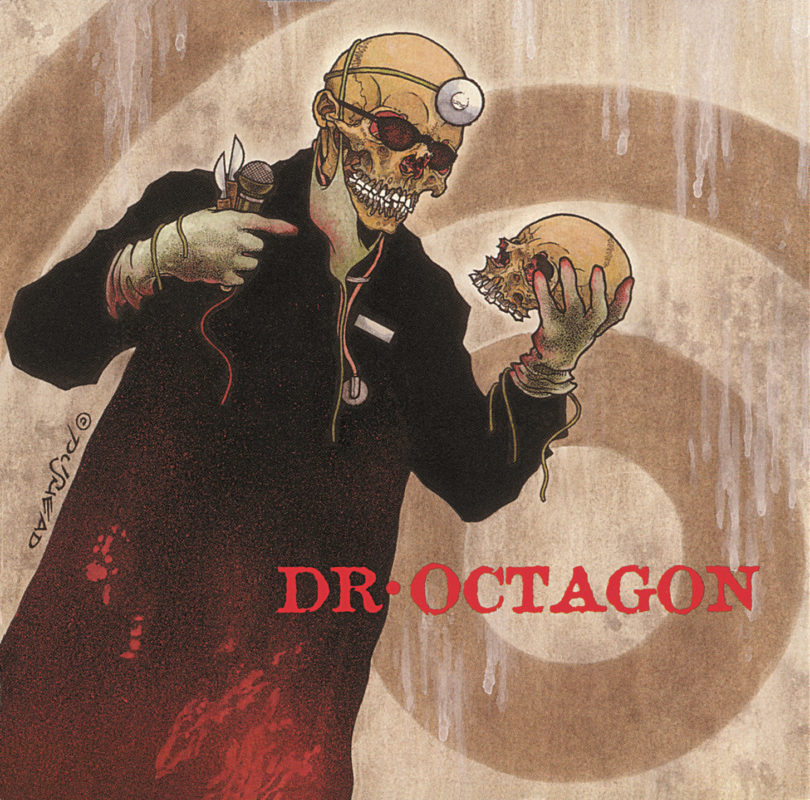 THE SCENE: In 1996 surfing the Web was a silent activity until multimedia company Macromedia announced Shockwave®, the first browser plug-in that could play sound over the Internet. I excitedly downloaded and installed Shockwave then clicked on one the few song samples Macromedia had posted, expecting to hear something simple, basic. What I heard instead was a molasses-slow alien ooze, undulating under tender displaced violins, punctuated by a single note bass line and a calmly disturbed emcee:

Dr. Octagon, paramedic fetus of the east
With priests, I’m from the church of the operating room
With the strike support, scalpels since the holocaust
I do indeed in greed, explore meet the patients
Back to brooms with the nurse with the voodoo curse
Holding up office lights, standing at huge heights
Back and forth, left wing swing to north
East and south with blood pouring down your mouth
I come prepared with the white suit and stethoscope
Listen to your heartbeat, delete beep beep beep
Your insurance is high, but my price is cheap
Look at the land… blue flowers!

By this point I’d completely forgotten about the technological feat of audio streaming because my synapses were in overload. What was he on about? Who was responsible for this unhinged brilliance?

Turns out Dr. Octagonecologyst was the brainchild of ex-Ultramagnetic MCs rapper Kool Keith and up-and-coming producer Dan The Automator, with supremely wicked scratching by DJ Q-Bert. Kool Keith had long been twisting surreal verses about animals and orifices under assumed names but this was the first time his alter-ego had consumed an entire project.

The good doctor was on a mission to misdiagnose, over-medicate and violate all patients while traveling through time and space. Over a soundscape of boom-baps, blip-blips and skits that mimicked a 1950s hospital drama, Kool Keith uncoiled intricate rhymes of unbridled lunacy.

They drop science of the nonsensical kind in “No Awareness” (Reinforce mixing copper nickel-beryllium oxide/Concentric layers, proportional carbon density of the radius/Indisturbed existence if it does produce contradictory statements) and meet mutations in the creepy “Halfsharkalligatorhalfman” (With my white eyes, gray hair, face is sky-blue yellow/ Sideburns react, my skin is colored lilac/ My skin turn orange and green in the limousine/People think I’m mixed with shark, drinking gasoline).

Radio transmissions of the alien kind infiltrate the beat-poetry of “Technical Difficulties”, while the doctor reinterprets the Hippocratic oath in the clinically gangsta “Waiting List”:

You enter, step in the room, 4, 5
My overcompressed thoughts and ways make you get live
You are the patient, and I your black doctor,
Medical bills, insurance, cash in the ceiling.
Dioxalyn fingerprints here ever since
I got my white suit pressed, out the cleaners,
X-ray shades, with hard shoes and some razor blades
Who’s the brother that’s sick, and needs the operation?
Bullets removed from your head, grand central station
I gotta cut off your ear, first behind your neck
Rip out the stomach, and open rectum’s to dissect
Shine the light, inside, roaches crawling in your throat
I have no tools, my hammer’s done, my drill is broke

THE FALLOUT: … a label best known for country superstar Toby Keith and alternative rockers AFI and Papa Roach. Communication breakdown between the band members and the label came swift and hard, resulting in Kool Keith refusing to perform on a tour booked without his consent. Dr. Octagon soon disbanded, and Kool Keith had the doctor whacked on his next album, Dr. Dooom’s First Come, First Served.

Dr. Octagonecologyst is available from Amazon and you can sample tracks here:

Doing for doctors what Little Shop Of Horrors did for dentists, Dr. Octagonecologyst transforms repulsion into altered consciousness.