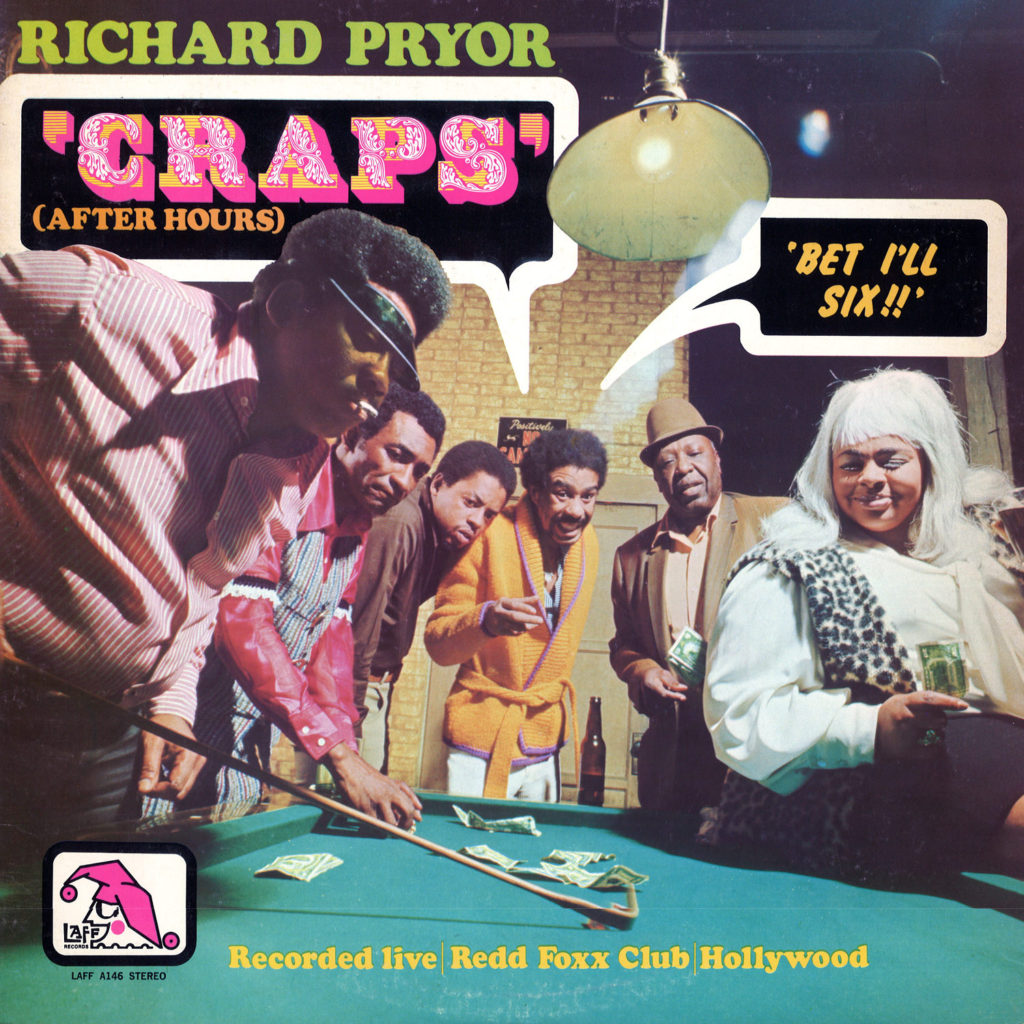 When this came out “Green Acres” went off the air. Coincidence?

THE SCENE: As I lament the premature loss of “Chappelle’s Show”, I have to remind myself how lucky we all are that “Chappelle’s Show” existed at all. Until the late 1960s television comedy was squeaky-clean and heavily censored. If you wanted edgy humor you had to hunt for it at out-of-the-way nightspots. And by edgy I mean “dirty”, because hardly anyone was using comedy as a platform for social commentary. Richard Pryor was the first comedian to destroy these barriers, and he did it with his 1971 album ‘Craps’ (After Hours).

Pryor had a decent career as a clean-cut joke-telling Bill Cosby-type of comedian, a fake persona that led him to an on-stage nervous breakdown. The civil rights and free speech movements radically affected his way of thinking, speaking and presenting himself, and after several years of dwelling in the underground fringes he re-emerged on the comedy scene as streetwise, truthful storyteller.

Pryor would now discuss whatever was on his mind – religion, politics, sex, racism – everything you weren’t supposed to talk about in public. Comparing Black people to White people? He did it first. Using the word “nigger” on stage? He did it first. Talking openly about Black life with a non-Black audience? Absolutely the first.

Where he used to perform impressions of celebrities he now performed impressions of people he knew from his childhood, many of whom were pimps and whores, thieves and junkies. But he gave them all a clear humanity, and they all seemed like people we might know.

He told miniature plays, complete with sound effects and multiple characters. He used the language of real people, and real people curse, and fight, and take drugs, and get themselves into absurd situations and try to laugh their way out of it. By doing this he freed his audience to think and say anything they wanted, and he performed this feat without telling one joke. Yet it’s some of the funniest material ever recorded.

One of the most interesting sounds on this album is the laughter. It rushes forth like tidal waves escaped from its owners. It says “I can’t believe he said that! Damn that was funny! Say some more!” It’s awkward, moist, and quite possibly the sound of a permanently altered mind.

THE FALLOUT: Released on a small label, ‘Craps’ (After Hours) was a cult hit, but Pryor didn’t become widely known until his next album, the jovially titled That Nigger’s Crazy. From 1974 on, Richard Pryor became the undisputed king of comedy.

‘Craps’ can be found in its entirety on Pryor’s Evolution/Revolution compilation, available from Amazon, and you can sample tracks here:

So much of Pryor’s humor and style has been absorbed into the culture, in both comedy and music (imagine hip-hop without his influence), that ‘Craps’ (After Hours) almost sounds quaint and standard by comparison.

NEXT WEEK: What are you thankful for?