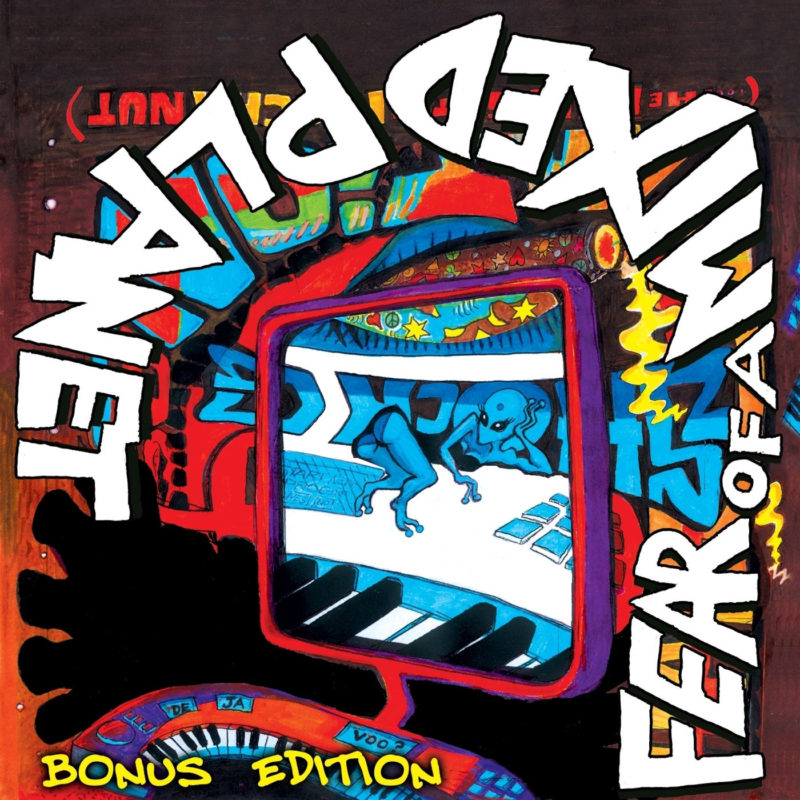 The G stands for “green”.

THE SCENE: On the face of it, the mere existence of a Shock G solo album sounds preposterous. He’s the face and voice of Digital Underground as well its the main songwriter, pianist, producer, illustrator and conceptualist — possibly even its personal chef and Pilates trainer — so one would assume a group created in his image would fulfill all his musical needs. Yet the hedonistic, über-player atmosphere of D.U. are a poor fit for creating songs that aren’t about macking, so seventeen years after the comical Sex Packets came the decidedly more thoughtful Fear Of A Mixed Planet.

Shock’s remade himself as a progressive environmentalist, concerned with respecting mother earth and its inhabitants, which brings a new clarity to his humor. He pokes fun at racism in the glossy, nougaty “Who’s Clean” by simply questioning the insanity of color names:

Like a latter-day Aztec, Shock also gives multiple shout-outs to the sun. The sandpaper and fog beats of “Sunshine Rime” surround warm verses about “the balance of life”. “Your Sun Iza Pimp” goes a step further in homage to the Great Gaseous Player in the Sky, dropping science about photosynthesis while questioning “Who taught him how to shine that?”

Unafraid to expose his less-then-sensible sides, he affixes dirty playground rhymes to the rhythms of a computer error in “The Rime In The Mochanut”, while sweating through the embarrassment and fetal regression of a traumatically bad drug trip in the paranoid “Baby You Okay”.

The penultimate song for me is “We’re All Killaz”, where Shock free-associates with whatever enters his twisted mind. A reversed keyboard squiggle squirms through an onslaught of in-jokes, non-sequiturs and random questions, as if corkscrewing through to the cortex of his ever-questioning brain:

Astronomers discovered another galaxy the other day
and this is what they had to say
“We’re happy cause it’s only a million light years away.”
(pause) WHAT?

THE FALLOUT: “What?” was also the commercial response to Fear Of A Mixed Planet. Released on indie 33rd St. Records (which I believe went out of business soon after), Planet was not well marketed and subsequently flatlined. Shortly afterwards Shock G announced his complete retirement from the recording studio.

Fear Of A Mixed Planet is still available from Amazon, and you can sample tracks here:

Melodic, holistic and iconoclastic, Fear Of A Mixed Planet is the blueprint of how to mature in hip-hop. Whether hip-hop has a place for a mature artist is anyone’s guess.

NEXT WEEK: Fela releases an album so uppity that it actually results in death.