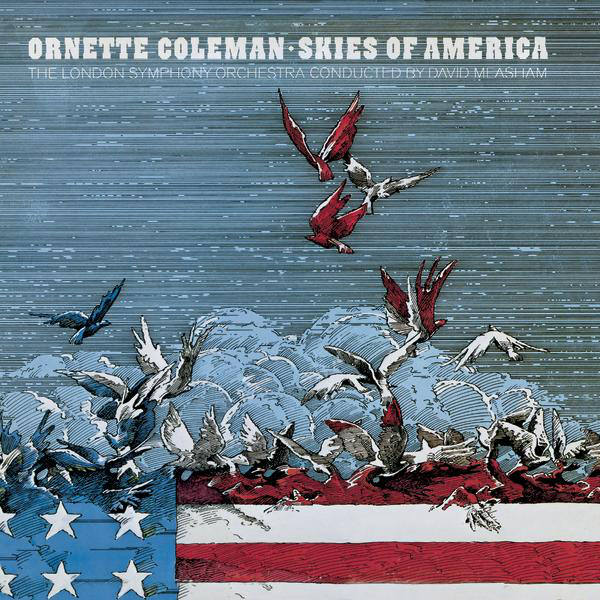 The home of the tonally brave.

THE SCENE: Although iconoclastic saxophonist Ornette Coleman is currently considered a genius (having actually won the MacArthur Foundation’s “genius” grant), in 1972 he was entering his third decade as Jazz’s most polarizing oddball. Was he really the shape of jazz to come, or an out-of-tune charlatan with meandering note clusters masquerading as compositions? The previous year’s Science Fiction was a funky career rebirth, but his next release shocked even his die-hard fans, the classical and magical Skies of America.

Fascinated with the breadth and speed of American re-invention, Coleman composed a expansive hymn to his republic, performed solely by the London Symphony Orchestra. (Thanks to the uptight British Musician’s Union, his current band was forbidden from playing on the recording.) Skies is where Coleman first gave a name to his theory of music, “Harmolodics”, ironically assigned to the least recognizable work in his canon. In Coleman’s mind, harmony, melody and rhythm are given equal weight while the key of the song is deemed irrelevant, a tonal situation that can produce continual discovery in both the performer and the audience.

Skies superbly uses smears of strings to create the sound of the sky, an infinite inverse chasm of healthy blue, poisonous brown and inky blackness. The tension of the title song mimics a wounded bird soaring through the air, dipping and tilting with the wind, but soldiering onward. In “Love Life” the sky lingers with the ashy, bitter scent of an arson aftermath.

As Coleman recorded this during the Vietnam Conflict, it’s easy to hear the swarming, swirling helicopters of “The Military”, or warriors running over jungle land mines in “Holiday for Heroes”. The woodpecker drums-led “The Good Life” is the soundtrack of our heroes coming to save the day, but in “Foreigner in a Free Land” our heroes are really disturbed rednecks at heart, full of fear, anger and ignorance.

Coleman makes only a few cameos on this album: the crushing terror of “The Men Who Live In The White House” opens up into a gentle hopeful solo, a theme repeated in the agitated loopzilla of “The Artists in America”. Is he soloing over a cheering crowd, or the boos of a hostile mob? He also rises into the vapor on the final cut “Sunday In America” a remembrance of prettiness interrupted, a day of grief turned to stillness.

THE FALLOUT: As usual for most Ornette Coleman albums, reviews were mixed and sales were meager, becoming the last recording for his label. After its release Skies Of America had one live performance at the Newport Jazz Festival in 1972, but it was revived again in 1983 by the Fort Worth Symphony as part of celebration of their hometown hero, including the proclamation of September 29 as “Ornette Coleman Day”.

Skies Of America is available from Amazon and you can sample tracks here:

With equal amounts of amazement and revulsion, Skies Of America reflects the schizophrenia and the hope of American identity.

NEXT WEEK: Q-Tip gets shutdown again.